The Spear - Edge's Spear won him multiple World Title reigns, both on Raw and Smackdown. Like Goldberg's Spear and Rhino's Gore, the maneuver was mainly a football tackle to the gut, without padding. When Edge felt that the end was near, he would take to a corner and wait for his opponent to stumble into position, sometimes pulling on his hair as he waited. When he's ready, Edge would run forward, slamming his shoulder into the gut of his foe and taking them to the mat, leaving them stunned long enough for Edge to get the 3 count.

Edgecution - For a time, this was one of Edge's finishers, before the Spear truly got hot. Edge will boot his opponent in the stomach and land a jumping DDT, flooring the opposition and, quite possibly, setting them up for the Spear. Edge won a few matches with the maneuver, but soon it became another move in his arsenal, instead of the main one. 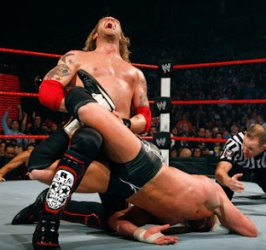 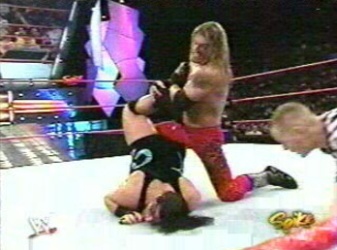 Edgecator - It wasn't used that often, but Edge did have a submission hold that he could pull out of his bag of tricks when in an I Quit match. The Edgecator was almost a reverse Sharpshooter, with Edge bending one of his opponent's legs behind their other one and having his own leg between, allowing for a great deal of leverage.

Edge-O-Matic - While certainly not remembered as much as the spear, The Edge-O-Matic (or Edgeomatic, depending on your spelling) was a relatively simple move with destructive consequences. Edge would find a way to get behind his opponent, sometimes by ducking under a punch, and would grab his opponent's head. Edge then sat down, yanking his foe backwards and causing them to crash the back of their head into the canvas. This also left the opponent in a good pinning position, something you always want in a finishing move.