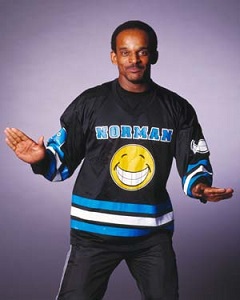 
History: Ok, so my information on Norman Smiley is very scarce. I'm keeping my eyes and ears open for more. Smiley entered the wrestling world as a student at Malenko's Wrestling School in 1986. After learning the craft, he began wrestling in the GWA in the late '80s, where he held the Global TV Title. He then wrestled some overseas and in Mexico, where he held, among others, the IPWA Tag-Team Titles. Norman then came to the EMLL in Mexico, where he became known as Black Magic. He became one of their stars, and went as far as winning the EMLL Heavyweight Title Tournament in late 1992, besting his nemesis, Ray de Jalisco Jr, in the Finals. Black Magic would hold the title for almost 2 years before finally dropping it. Black Magic continued wrestling in the EMLL for a few more years, without reaching his earlier plateau. He also wrestled for a few years in '95-'96 in ECW and other independents before coming to WCW in 1997.

Norman Smiley's stay in WCW, for the longest time, was not productive, as he was added to the jobber 'list', losing to many of the midcard WCW wrestlers on the TV shows. In late '98, however, Smiley started to turn "heel", creating the sensation known as the "Big Wiggle" Dance. This helped propell him slightly up the ladder. Smiley, now wanting his name pronounced "Smi-lay", defeated Prince Iaukea at Starrcade '98, then got into a large feud with Chavo Guerrero Jr, when he stole Chavo's stickhorse, Pepe, and threw him into a shredder, 'killing' him. At Souled Out '99, Smiley defeated Chavo with his chickenwing submission hold, the Norman Conquest.

After the victory, however, Smiley's career again fell back into the recesses of WCW. Rumors were announced that some people found Smiley's Big Wiggle to be offensive, and since WCW was working hard to be the 'cleaner' wrestling federation, he was not allowed to do it anymore. It's unclear how true this rumor was. Suffice to say, Smiley was gone for most of 1999, only wrestling in jobber matches and Saturday shows.

Smiley started to make his comeback when it was announced that there would be a new Hardcore Title for WCW. Smiley began coming out and saying that he was "tougher than a 2-dollar steak", and that he would win the Hardcore Title. This seemed very strange, since no one pictured Smiley as a Hardcore wrestler. Smiley also competed in the World Title Tournament, surprisingly defeating Bam-Bam Bigelow in the first round, before losing to Billy Kidman. Smiley then went on to face Brian Knobs for the belt at Mayhem '99 in a wild brawl that went all the way through the arena to the backstage area. Knob's manager, Jimmy Hart, continually interfered, trying to help Knobs. But this later backfired, as the two fought into an elevator. When it reopened, Hart ko'ed the first man out with his megaphone. Unfortunately for him, that was Knobs, which allowed Smiley to make the pin and, unbelievably, become the first WCW Hardcore Champion.

Smiley & Knobs continued to feud over the Hardcore belt, as Knobs turned on his manager due to the slip-up. Smiley also had to contend with many other hardcore types, and began wearing 'battle gear' to the ring in the form of pads and a helmet. He usually took a beating, but also somehow managed to get away with the belt. In the WCW World Tag-Team Title Tournament, Smiley was paired with a lady, Asya, who was a true powerhouse. The team defeated "Hacksaw" Jim Duggan & Perry Saturn, then fell to Buff Bagwell & Kanyon. At Starrcade '99, Smiley found himself facing off against the Monster, Meng, who basically dominated their match, throwing Smiley all over the arena and causing many a Smiley scream. It seemed a sure thing that Meng would defeat Smiley for his gold, but intervention came from Fit Finlay & Brian Knobs, who beat down Meng enough for Smiley to win once again.

Things started to fall apart for Smiley again as 2000 got under way. In the second week, Smiley lost the Hardcore Title to Brian Knobs, finally falling from his perch at the top of the division. After losing, Smiley fought to make his way back to his gold, signing in a Four-Way match at Souled Out between himself, Knobs, Finlay, & Meng. At the match-up, Smiley came out dressed in riot gear, complete with a shield to protect him from the other brutes. It was not entirely successful, as Smiley took a lot of punishment during the brawl. During the match, Knobs & Finlay once again worked as a team, putting Smiley & Meng, who wouldn't work together, in a lot of trouble. Meng fought back, knocking down Knobs, then went after Finlay, while Smiley tried to capitalize on Knobs in the ring. But Knobs managed to knock out Smiley with his own riot shield and got the pinfall, keeping the Hardcore Title.

Smiley's next feud came about with the members of Three Count, Evan Kouragias, Shannon Moore, and Shane Helms. During their battles, Smiley injured his ribs, putting him at even more of a disadvantage. The handicap match was signed for Superbrawl X, and as much as Smiley fought back, he couldn't withstand a three-man attack. After a pair of combo splashes, the trio locked Smiley into a submission hold, forcing him to give up. This killed off their feud, as Smiley moved elsewhere, joining the KISS Demon in his battles against a new tag-team, XS (Lane & Rave). The duo became known as the Screamin' Demons, forming an impressive tag-team for a short time. The team met up with XS at Uncensored '00. In the end, while the Demon was brawling with Rave on the outside, Smiley locked on the Norman Conquest on Lane in the ring, getting the submission victory. After the match, XS blamed their loss on Miss Hancock, their valet, only to have the Screamin' Demons come to her aid. The trio then did the Big Wiggle together, earning the cheers of the crowd.

In April '00, Eric Bischoff & Vince Russo returned to WCW and took over, immediately changing around the format and vacating every title. They formed the New Blood, a group of the younger, less pushed wrestlers, who fought against the Millionaire's Club, the more experienced ones. Smiley soon partially joined up with the New Blood, lending his talents to the Hardcore division. In a Hardcore contender's match, Smiley was teamed up with Terry Funk, with the stipulation being that the two people to decide the match would be the ones to fight for the belt. After a violent brawl between many members of the Hardcore community, Smiley & Funk pinned each other, surprisingly earning themselves the match at Spring Stampede '00. The match started in the backstage area, when Funk found Smiley in a Men's Rest Room. The two men battled all over the backstage area, with Smiley getting some aid from Dustin Rhodes. But Funk finally won out, ko'ing Smiley and taking the Hardcore Title out of his reach.

Smiley continued to be the choice of the New Blood to go after Funk and retrieve the Hardcore Championship, and he soon got some help from a new ally in Ralphus (Chris Jericho's former aide). The two men joined together to battle against Funk, eventually getting a Handicap Hardcore match signed for Slamboree '00. The match again started in the rest rooms, but this time it was a set-up, as Funk found Ralphus, only to be jumped by Smiley, who brutally beat on Funk for some time. They eventually made their way to ringside, battling on announcer's desks, in the crowd, and into the ring, where Smiley utilized a ladder to take the advantage. But after Funk took out Ralphus with chairshots, Smiley was forced to protect his partner, leading to him getting rolled up and pinned. This proved to be disasterous for Norman, as he and Ralphus were later 'fired' by Bischoff & Russo, due to their ineffectiveness against Funk.

For the next month, Smiley & Ralphus appeared doing odd jobs for WCW shows. They handed out popcorn at one point (without getting money for it), and tried making cotton candy at another (only to have Ralphus ruin it by putting his hands in the wrong place). After many odd jobs, Smiley & Ralphus were finally told that they could work their way back into the limelight again, and were given another Hardcore Title shot, this time against Big Vito. The three men faced off at Bash at the Beach '00, with Vito allowing Ralphus to be part of the match. They fought to the back, going through cars, elevators, and more. After Smiley was leveled, Vito chased Ralphus back to the ring, where he put the big man through a table to get the win, and retain the title. Once again, Smiley & Ralphus had blown their chance. This time, they wouldn't return, eventually fading out from WCW.

The rest of Smiley's WCW career consisted of appearances either on Saturday night shows or in jobber fights. He did defeat Dave "Fit" Finlay at the Millenium show in November '00, but did not earn a push for it. Smiley was one of the individuals who did not appear on the Season Finale of the Turner-ran WCW as it came to a close. For a while, Smiley wrestled on the independant circuit, using his small fame from the WCW to earn him work. He would later join up with the WWAS, which became a harbor for many former WCW wrestlers. Smiley wrestled at the October PPV, sticking with what worked for him: hardcore. He fought a hard match with Devon Storm (formerly Crowbar), winning out in the end. Will Smiley gain gold in the WWAS? Anything's possible for what could be one of the 'luckiest' wrestlers in the world today.