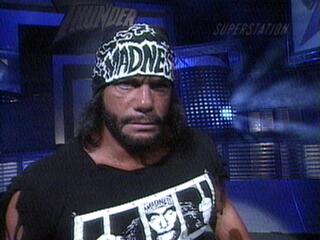 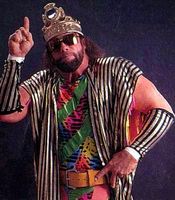 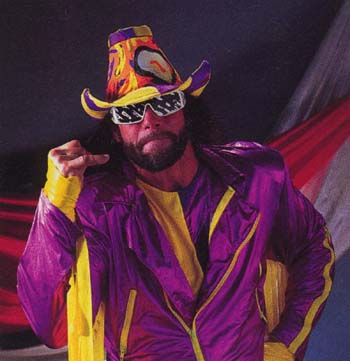 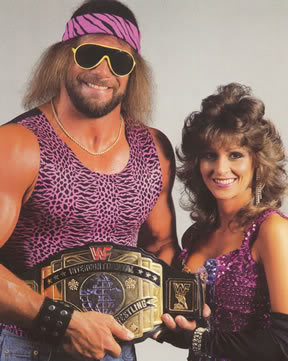 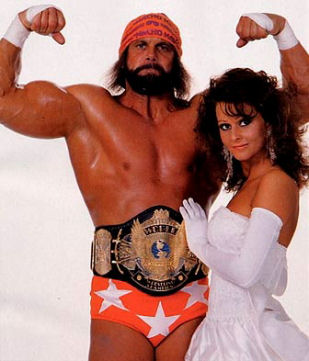 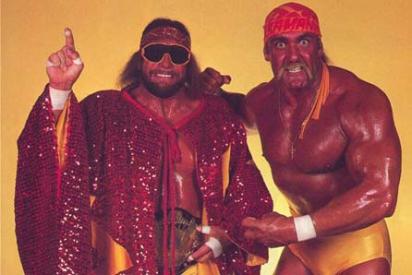 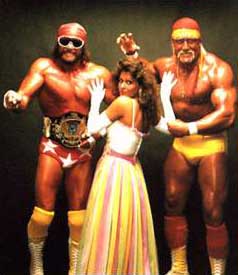 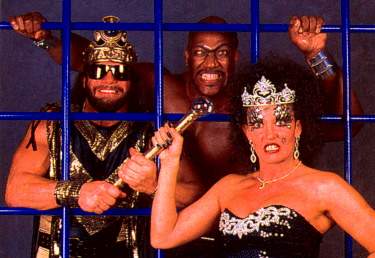 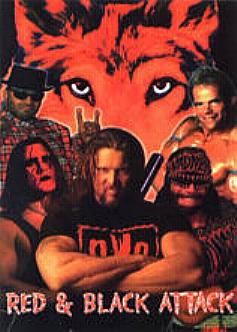 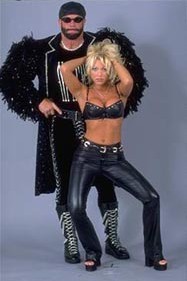 Randy Poffo, aka the Macho Man, worked his way up into one of the most famous wrestling faces in the world during the 1980's and 1990's. He earned that fan recognition by wrestling in different organizations for over 20 years. A former baseball minor leaguer with such teams as the Cardinals and the White Sox, Savage began his career wrestling in the lower ranks of the US wrestling system, along with his brother Larry. The two brothers won the Southeastern Tag Team Titles together, then moved on to different organizations, sometimes wrestling as a team, sometimes being against each other. In each organization Savage went to, he proved his worth. He won the ICW Title in a match against his brother; defeated Jerry Lawler for the Southern Heavyweight Champion; then made his move towards the WWF, where his fame would truly begin.

When Savage joined the WWF, he began his long association with the lovely Elizabeth. Savage continued his title run when he won the WWF Intercontinental Title from a bloody Tito Santana in 1986. During his I-C Title reign, Savage had a vicious feud with George "The Animal" Steele, which really began when Steele showed interest towards Miss Elizabeth. Savage usually came out on top in their matches. Savage held the I-C belt for more than a year before Ricky "The Dragon" Steamboat managed to defeat him in one of the great feuds of the '80s. While Hogan became the cornerstone of the WWF, Savage became one of the background fan favorites. From his triumphant winning of the tournament for the WWF World Title, defeating Ted DeBiase, to his war with Hogan, who he eventually lost the title to, Savage helped improve the WWF in many ways. He became a "heel" for a while as the "Macho King", taking on the Sensational Sherrie as his manager. His feuds were numerous, as he faced such greats as Brutus Beefcake (the Disciple), Dusty Rhodes, and the Ultimate Warrior. It was against the Warrior that Savage lost a retirement match, in a bout that many thought stole the show at Wrestlemania VII. It was here that he and Elizabeth reunited, and they were "married" on a future WWF PPV.

Savage was reinstated to the WWF soon after, and had feuds with Jake "The Snake" Roberts and Ric Flair, who he managed to defeat to earn the WWF World Title for the second time. After losing the belt to Flair 5 months later, Savage briefly left the WWF to be a wrestler in the USWA, where he won the USWA Heavyweight Title from Lawler. He came back into the WWF for a short time to have feuds with Crush (Brian Adams), Bob Backlund, and Lex Luger, before a contract dispute caused him to depart from the WWF. He went to various organizations for a few months, then came to WCW.

Savage immediately made his prescence felt in WCW. In November of 1995, Savage won World War 3 to become the WCW Heavyweight champion, putting him on a short list of wrestlers who have held both WWF's and WCW's Heavyweight Titles. He lost the title to Flair, his old nemesis, a month later, came back the next month and regained it from Flair, then again lost to Flair. Savage soon after joined Sting and Lex Luger against the beginnings of the nWo. After the betrayal of Hollywood Hogan, Savage spearheaded the war against the nWo the next couple of months, taking and giving some 'savage' beatings. Although he temporarily left WCW at the end of 1996, he returned apparently ready to continue the fight. But, in a surprise move at Superbrawl VII, Savage joined the nWo, the scourge he had been fighting for months.

After a few months of feuding with the likes of Luger and Diamond Dallas Page, Savage was the first to show signs of revolt against Hogan. Claiming that he should be the leader of the nWo, he and Hogan had some epic matches, in which the nWo members chose to follow Hogan... until Kevin Nash, one of the founding fathers of the nWo, joined with Savage and created the red and the black nWo Wolfpac. Savage later won the World Title for the third time, this time defeating Sting. But he only held the title for one day before being defeated by Hogan. Surviving many vicious attacks from Hogan, including getting run over by a red-and-yellow car, Savage, stayed a prominent member of the Wolfpac, having feuds with Bret Hart, Hogan, "Rowdy" Roddy Piper, and Diamond Dallas Page. But, after being "attacked" by the nWo Hollywood, Savage left the ring during most of '98, for knee surgery and subsequent recovery time.

At the end of '98, Savage reappeared during a Monday Nitro. He came out in an nWo Black 'n' White shirt, but actually helped Ric Flair defeat Eric Bischoff, making Flair the commissioner of WCW for 90 days. This was the last seen of Randy Savage for about 3 months. He appeared in April '99, the week before the Spring Stampede PPV, telling the world that he would be the special referee at the 4-Way Title Match. Due to Savage's interference, Diamond Dallas Page won the World Title. Savage then began feuding with Ric Flair, who, being the President, refused to reinstate him as a wrestler. Savage was later reinstated by "Rowdy" Roddy Piper. Savage's actions became confusing, as, on one hand, he, Gorgeous George, Miss Madness, and Madusa feuded against Flair and Charles Robinson, looking like a face. On the other hand, Savage helped DDP retain the World Title, looking like a heel. Savage couldn't stop Kevin Nash from winning the title at Slamboree '99, though.

After the May PPV, Savage began a major feud with Nash. He started things by knocking Nash out, then putting lipstick on his face. Nash countered by pouring raw sewage through the sunroof of Savage's limo. When Savage brought a bucket of fermented slop to the next show, Nash tricked him, holding his attention while a lady climbed out of the workout bag Nash had brought to the ring. The lady poured the slop onto Savage and ran. Savage had the last laugh of the night, though, ordering a hummer to smash the limo Nash was sitting in repeatedly. The limo, and apparently Nash, were totaled.

At the Great American Bash, Savage landed the Big Elbow on Nash, but the champion kicked out. Savage was later powerbombed by Big Sexy, but before Nash could pin him, his ladies, and later Sid Vicious, attacked him. Savage thus lost by DQ. Savage and Vicious became a force against Kevin Nash, but Nash had an ally in Sting. Savage and Vicious, though, alluded to the hummer incicent, making it seem like Sting might have been the driver. The foursome faced of at Bash at the Beach '99, with the World Title on the line for whoever made the pin in the tag-team match. After Gorgeous George attacked Nash from behind, Sid Powerbombed Nash and Savage used his big elbow drop to get the victory and the World Heavyweight Title for the 4th time. However, just like the last time, his title reign only lasted one night before he lost it to the returning Hollywood Hogan, partially because of Nash attacking him during the match.

In late July '99, Savage came out and fired two of his ladies, Miss Madness '99 and Medusa. The two took exception to it, and were complaining to Savage, when Dennis "The Worm" Rodman reappeared in WCW and nailed Savage from behind. Savage, when he recovered, told Rodman that he was going to make him his b**ch. The next week, Rodman kidnapped Gorgeous George for a very brief period of time, angering Savage even more. The two met at Road Wild '99, in a violent match that put down more than one referee, as both fought all over the arena. Finally, Savage got the win, when Gorgeous George hit the low blow on Rodman, leaving him open to a chained fist to the head and the pin. Unfortunately for Savage, the victory over the basketball player turned out to be one of his last matches in WCW. He faded quickly out of the picture, and stayed out of the main events for quite some time. Savage still appeared occassionally in different areas, from being the spokesperson for Slim Jim, to creating his own rap album.

However, nothing could compete with the sport of professional wrestling, so Savage made a surprise return at NWA-TNA's November '04 pay-per-view, Victory Road. Savage later teamed up with Jeff Hardy & AJ Styles to battle against the powerhouse threat of the Kings of Wrestling (Jeff Jarrett, Kevin Nash, & Scott Hall). The wrestlers met up at Turning Point in December '04, with Savage getting the pinfall on the NWA World Champion, Jeff Jarrett. Soon after the match, however, problems were said to erupt between Savage and NWA-TNA management, with Savage possibly having walked out from the organization. Another version said that Savage's health was the reason he left, as the main event of the next PPV was expected to be Savage vs. Jarrett for the NWA World Title. Either way, the match never happened.

Savage would help out with training wrestlers over the next few years, while also moving on with his own life. On May 10th, 2010, Savage married his second wife, Barbara Lynn Payne, and seemed to settle down to a life after wrestling. Tragically, this life only lasted one year. On May 20th, 2011, Savage suffered a massive heart attack while driving with his wife, leading to the car crashing into a tree. While his wife was ok, Savage passed away, sending a shockwave throughout the wrestling world with the loss of a true superstar. Randy Savage was 58.