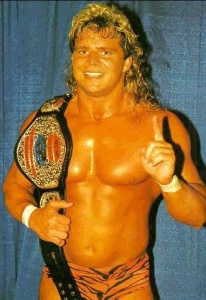 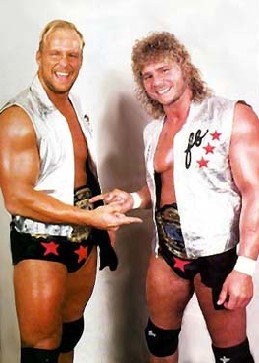 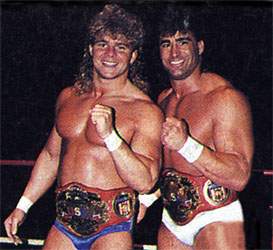 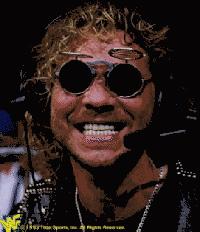 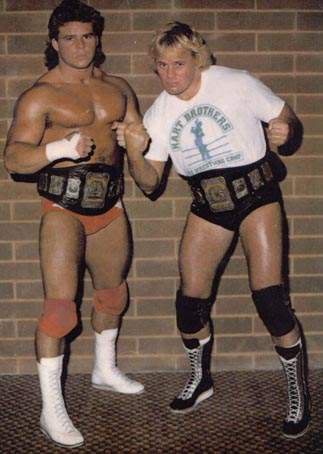 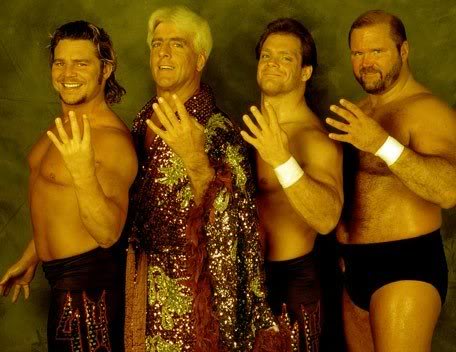 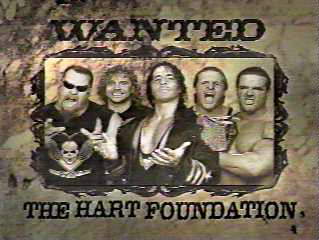 
History: For nearly a decade, "Flyin" Brian Pillman was known as one of the most electrifying athletes in professional wrestling. Most agreed that he performed in some of the greatest matches ever seen, performing his best in the early '90s. Yet he never truly reached the peak of the mountain, falling just as he was about to head towards the summit.

Pillman, right out of the gate, had to fight hard to live his life. He was born with throat cancer, which needed over 30 operations before the age of three to repair the damage. This left him with a raspy voice, one of his trademarks in the ring. Pillman's athletic career actually began in football, as he was an All-American at Ohio University. He would go on to compete in both the CFL and the NFL, including a stint with the Cincinnati Bengals. When an injury took him out of the sport, Pillman decided to head towards professional wrestling. He headed to Canada, training in Stu Hart's "Dungeon" alongside such notable wrestlers as Chris Benoit and Owen Hart. He soon learned the craft well, and made a strong team with Bruce Hart called "Bad Company". They would go on to win the Stampede International Tag-Team Titles twice, once while winning a major tournament.

In 1989, Brian Pillman chose to leave Stampede Wrestling for the larger draw in the NWA. At the time, new talent was being sought, which included "Flyin" Brian. He worked hard during his first year with the company, gaining experience and fan recognition for his great matches, and soon moved up into the mid-card, feuding with Lex Luger over the NWA United States Title. Although Luger almost always came out on top, Pillman still earned respect from his peers for the matches he wrestled. He also joined with the Z-Man (Tom Zenk), forming a strong tag-team that stormed through more veteran teams like the Midnight Express and the Fabulous Freebirds to gain the NWA United States Tag-Team Titles. They would hold the belts for over three months before losing them to the Midnight Express.

The beginning of 1991 saw Brian Pillman's fame start to grow. He concluded a long feud with Buddy Landell, in which he normally came out on top, then moved into the big time, joining with Sting & the Steiner Brothers against the Four Horsemen in a Wargames Match. Unfortunately, Pillman's team lost, when Pillman himself was taken out. Pillman next started a feud with Barry Windham, which included a violent "Taped Fist" Match at SuperBrawl. A few weeks later, Pillman challenged Windham to a "Loser Leaves Town" Match. The match became a tag-team bout, with Pillman joining with El Giante against Windham & Arn Anderson. It was a bad night for Pillman, as he was pinned and forced to 'leave' the company. Not long afterwards, the Yellow Dog appeared, wrestling for a few months. This run soon faded out.

Pillman's true stardom hit with the creation of the WCW Light Heavyweight Championship at the end of 1991. In the tournament to decide the first champion, Pillman defeated Richard Morton in the finals to claim the gold. He would defend it against multiple challengers over the next two months, before losing it in a classic match with Jushin "Thunder" Liger, one of the best high-flyers to come out of Japan. Pillman would have a friendly feud with Liger for the next few months, and managed to regain the belt in another great match at Superbrawl II. Pillman stayed the Light Heavyweight Champion for the next six months, defending against Liger, Tom Zenk, and others, before finally dropping it to Scotty Flamingo(Raven). After a short feud with Flamingo over the belt, Pillman moved away from the Light Heavyweight division, intent on other endeavors. HE teamed briefly with his old foe, Liger, but the team never went far in the title ranks.

Pillman's next big push came at the beginning of 1993, when he was brought together with "Stunning" Steve Austin as the Hollywood Blondes. The duo proved to be a great heel team, feuding with Ricky Steamboat & Shane Douglas, the WCW & NWA Tag Champs. In March '93, they finally managed to take the team down, winning the belts. For the rest of the spring and summer, the Hollywood Blondes dominated the tag-team division, keeping the titles despite challenges from Dos Hombres, the Four Horsemen, and other formidable tag-teams. In August '93, Pillman, injured, couldn't wrestle, so Austin chose Lord Steven Regal to help him defend against Arn Anderson & Paul Roma. The members of the Four Horsemen won the match and took away the belts. Not long afterwards, the Hollywood Blondes broke apart, having a brief feud, caused by Col. Robert Parker, where Austin came out on top. Pillman later got his revenge on Parker, winning a match that made Parker have to dance in a chicken suit.

Pillman continued to feud with Austin into 1994, joining with Sting & Dustin Rhodes in a "Thundercage" Match against Austin, Rick Rude & Paul Orndorff. Pillman's group came out with the victory, more because of Sting than of Pillman, but a win was a win. Pillman then had a short feud with the WCW Television Champion, Regal, before fading for a time from the title pictures. He was given different gimmicks to try, including a "California" surfer run that never caught on. It took Pillman developing a more crazy persona that brought his career back to life, becoming the "Ticking Time Bomb" and the "Loose Cannon of WCW". This got him a spot with Ric Flair's Four Horsemen, giving him a group to help him cause chaos in WCW. With the Horsemen, Pillman had a major feud with Kevin Sullivan, who, while part of the Dungeon of Doom, was also a booker with WCW. They fought in an "I Respect You Strap" Match, which had Pillman quickly telling Sullivan "I respect you, booker man!" Later on, Pillman was supposedly 'fired' by Sullivan. Whether he was fired from WCW or not is not known. Pillman did begin appearing on ECW, antagonizing Shane Douglas with talk about the Four Horsemen, but before anything came from that, a major crash threatened Pillman's future.

On April 15th, 1996, Pillman was involved in a terrifying car accident that saw him flung over fourty feet from the car. His ankle was said to have been almost completely destroyed, as he nearly lost his leg. This put him out of wrestling for a good amount of time, keeping him out of the enviroment he desired. Pillman soon returned to television, appearing some in ECW in a wheelchair and stating his views. But this did not last long, as Pillman was later signed by the WWF. He made his first appearance at King of the Ring '96, and later joined the announcing team as a color commentator. For a time, Pillman worked as an announcer and an interviewer, until his former partner, now "Stone Cold" Steve Austin, attacked him with a steel chair, attempting to break his already-broken ankle. Pillman would disappear for a while, mainly to have reconstructive surgery so that he could walk again.

In April 1997, Bret Hart began 'reforming' the Hart Foundation, bringing together his brother Owen and his brother-in-laws "The British Bulldog" Davey Boy Smith and Jim "The Anvil" Neidhart. Surprisingly, Brian Pillman appeared as well, allying himself with the heel Hart Foundation in the fight between Canada and the USA. At Canadian Stampede in July '97, the Hart Foundation took on Austin, Ken Shamrock, Goldust & the Legion of Doom in a war between countries. Since it was fought in Calgary, Alberta, Canada, the crowd was pro-Hart Foundation, putting the pressure on the American squad. In the end, Owen Hart pinned Austin, getting the Canadians the victory. Pillman would move on from this feud to battle against Goldust, which became a major skirmish when Goldust's woman, Marlena, became involved. At Summerslam, Pillman lost a "Loser Wears A Dress" Match to Goldust, being forced to don a golden dress for nearly a month. But Pillman got some revenge later on, winning at Ground Zero to win the services of Marlena for thirty days. He then entered a feud with Dude Love, and was set to meet him at Badd Blood in a Falls Count Anywhere match. Sadly, this was a match never to occur.

On October 5th, 1997, only a few hours before Badd Blood, Brian Pillman was discovered dead in his hotel room. Although many reported that drugs played a factor in his death, it was later learned that Pillman had a previously undiagnosed heart condition, the same condition that had caused his own father's early passing. At 35, Pillman left behind a wife who was expecting his sixth child. It was a tragic loss for the wrestling world, as Pillman was finally looking like he would obtain the glory and fame that he so richly deserved. Where he could have gone in the future will forever remain a mystery. He inspired many to greater heights, even after his death, as wrestlers competed for many years at the Brian Pillman Memorial Shows. During a time when WCW and the WWF were in heavy feuds, they stopped and showed their respect for a great wrestler, by competing together for one night. It's a tribute that "Flyin" Brian Pillman deserved, as one of the pioneers of modern wrestling.