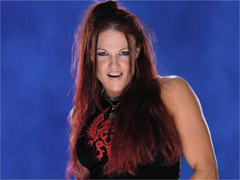 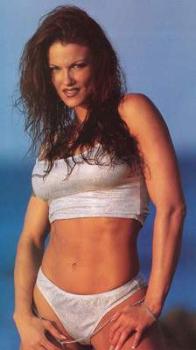 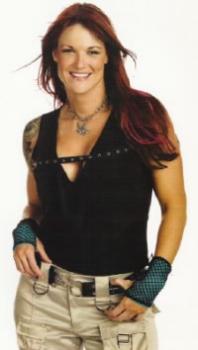 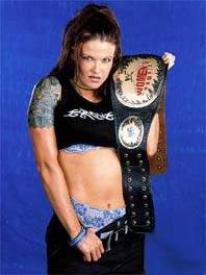 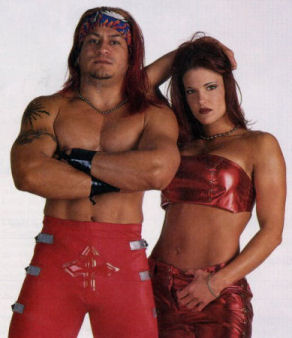 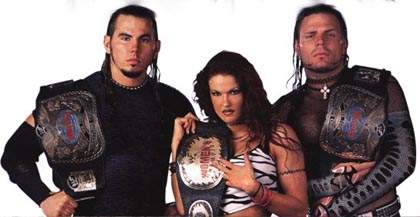 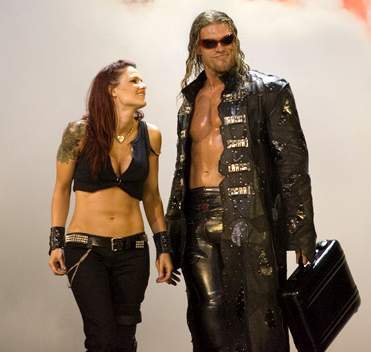 Lita is one of the most skilled & beautiful competitors to ever grace the squared circle. Before coming to ECW, Lita competed in EMLL and the independent circuits as Angelica. She served as a manager for a while, managing Christopher Daniels for a time.

She then landed in ECW and immediately allied herself with Roadkill & Danny Doring. On August 28, 1999, the trio were successful over Jazz, Super Nova & Chris Chetti at the ECW Arena. On the October 22, 1999 episode of ECW on TNN, the infamous spanking incident occured in which Miss Congeniality (Lita) held Tammy Lynn Sytch as she was spanked by Dawn Marie with a paddle. However, Dawn turned on Ms. Congeniality by hitting her over the head with the paddle. Dumas signed a development deal with the WWF on November 1, 1999.

On the February 8, 2000 Smackdown!/Sunday Night Heat tapings, WWF Light Heavyweight champion Gillberg challenged any Light Heavyweight in the back to a title match. Essa Rios (the former Papi Chulo) accepted, and was accompanied to the ring by Lita. Rios pinned Gillberg and picked up the title with a Moonsault. Lita surprised fans by executing the moonsault as well on the former champion. The next night on Raw, Essa Rios was victorious over Crash Holly after Lita delievered a hurricanrana from the ring steps. On the May 22, 1999, Essa was set to tag with the Godfather aganist Dean Malenko & Perry Saturn. Lita spotted Rios with one of the Godfather's ladies and became jealous. She cost Rios the match. The following night on the Smackdown tapings, Lita accidentally cost Rios a match with Matt Hardy. Essa became very angry and delivered a powerbomb and moonsault to his valet. The Hardyz came back in to make the save.

On the June 15, 2000 edition of Smackdown, Lita came in and delivered a sidewalk slam and top rope leg drop to Test & Albert's manager, Trish Stratus, after she slapped Jeff. The following week on the same program the Hardyz & Lita fell to T&A and their manager. At the '00 King of the Ring, Lita stopped Trish's interference in the Fatal 4 way elimination match for the WWF Tag titles (The teams were the Hardyz, T&A, Edge & Christian (Winners), and Too Cool (Champions)). She delivered a hurricanrana to Test as well. After weeks of being assaulted by Trish, Lita pinned her in a 6 person tag pitting T& A & Stratus against The Hardyz & Lita at the '00 Fully Loaded. On the July 27, 2000 edition of Smackdown, Lita & Chris Jericho defeated Chris Benoit & Stratus. On the July 31, 2000 edition of Raw, Lita & The Rock defeated Triple H & Trish. On August 21, 2000 edition of Raw, Lita defeated Stephanie McMahon-Helmsley for the WWF Women's Title, which she would hold for 2 months.

Lita next feuded with Dean Malenko. On December 27, 2000, Lita and Malenko went out on a date due to stipulations. By the end of the night, Malenko ended up being beaten by Hardyz in a hotel room. At the '00 Armegeddon, The Hardyz & Lita fell to The Radicalz when Dean Malenko forced Lita to submit. Lita decided that enough was enough from Malenko, so she challenged him to a match on the February 19, 2001 Raw, which she won. After the match, Lita & Matt Hardy kissed in the middle of the ring. At the '01 Invasion, Trish & Lita were victorious over Alliance girls Torrie Wilson 7 Stacy Keibler in a special tag team bra & panties match. Lita & Torrie defeated Keibler & Mighty Molly at the '01 Rebellion. Trish Stratus served as the refree. At the '01 Vengenace, Lita had the uneasy task of serving as the refree for the Jeff vs. Matt Hardy match. Jeff was the winner, causing even more friction between Lita and Matt. Before more could be done, however, Lita suffered a broken neck while taping Fox's Dark Angel season finale. She is set to be out nine months.