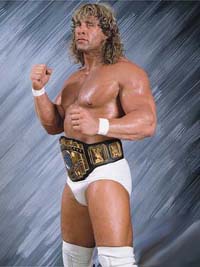 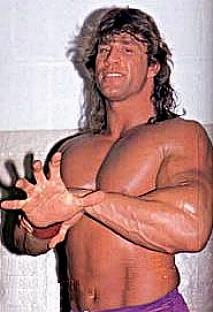 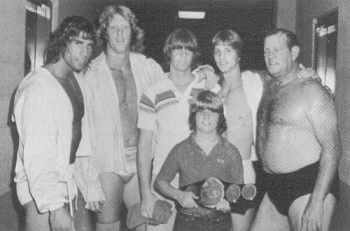 History: In all sports, there are "What Ifs". There are athletes that have such promise, yet never reach the heights that seem their due. In professional wrestling, the Von Erich family certainly qualifies as "What Ifs", as tragedy befell this great wrestling family. One of the most visible tragedies came with Kerry Von Erich.

Kerry Adkisson was born in 1960, one of many sons of the great professional wrestler Fritz Von Erich (Jack Adkisson). At first, Kerry's athletic thoughts turned away from his father's 'second' sport, instead being intent on following Jack into discus-throwing. Kerry would go on to set the junior-world record, as well as breaking the SMU record held by his father. But just as Kerry's career seemed to be chosen, the US boycott of the Olympic Games in 1980 occured, dashing Kerry's hopes to win a gold medal. Knowing that he could not wait four more years, Kerry joined the family business, becoming "The Modern-Day Warrior" Kerry Von Erich.

Kerry would have a great run in the National Wrestling Alliance in the early '80s, immediately becoming the most-popular Von Erich, along with his brothers, David, Kevin & Mike. In the Texas branch of the Alliance, Kerry soon began a great series of matches with the NWA World Champion, Ric Flair. In one of those matches, at Christmas Star Wars '82, Von Erich faced Flair in a "No DQ Steel Cage" Match. Just as Von Erich was about to win the NWA World Title by escaping the cage, the special referee, Michael Hayes, slammed the cage on his head, knocking him out long enough for Flair to win. This led to an epic feud between the Von Erich brothers and Hayes & the Fabulous Freebirds that lasted for years. It also led to Kerry holding an almost-uncountable number of Tag-Team Titles with the NWA Texas and the World Class Championship Wrestling branches.

In 1984, Kerry had to deal with the death of his brother, David, who passed away while touring in Japan. It was reported as an intestinal infection, although some rumors claimed that it was a drug overdose. In May '84, a tribute show was held in David's memory. At the show, Kerry finally realized his dream, defeating Ric Flair to gain the NWA World Heavyweight Championship, dedicating it to his brother's memory. Kerry would only hold the belt for a few weeks, before Flair reclaimed the belt. Still, it was one of Von Erich's finest hours. For the next two years, Kerry continued to be a main attraction, wrestling everyone from Flair to a heated feud with Gino Hernandez & Chris Adams. But Kerry's career would soon take a drastic turn.

On June 4th, 1986, Kerry was in a horrendous motorcycle accident that nearly ended his life. With a dislocated hip and a badly injured right leg, Kerry was in bad shape. Doctors tried hard, but could not save his leg, eventually amputating it. For most people, that would be the end of their wrestling career. But Kerry proved he was made of sterner stuff. With a prostetic leg, Kerry returned to the ring, once again joining his brother Kevin in the WCCW Tag-Team ranks. He also became a major contender for the WCCW Heavyweight Champion, nearly winning it once over Al Perez. In 1988, Kerry finally made it, winning the belt four times during the year. In October '88, Kerry faced off against AWA Champion Jerry "The King" Lawler, with the vacated WCCW Title on the line, as well as the AWA belt. Kerry managed to win, briefly unifying the two belts, before he was made to return the AWA belt back to Lawler. The two would face again, in a true unification match, at AWA SuperClash III. This time Lawler got the upper hand, bloodying Kerry so badly that the ref called the match, giving Lawler the AWA and WCCW belts (which would later become the USWF Unified Title).

In 1990, Kerry finally made the jump to the World Wrestling Federation, appearing in the summer as the Texas Tornado. He debuted by defeating Buddy Rose, making a grand entrance into the television world. Despite his prostetic leg, Kerry continued to be a major success, as he quickly moved up the rankings and challenged for the Intercontinental Title. At Summerslam '90, the Tornado took the place of a badly-injured Brutus Beefcake in the title match, and got the upset, beating Mr. Perfect (Curt Hennig) to win the Intercontinental Heavyweight Championship. The Tornado would hold the belt for three months, defending it against anyone who wanted a shot, before Mr. Perfect managed to regain the belt. The two wrestlers would feud for the next few months, with the Tornado being unable to regain the belt.

In 1991, the Texas Tornado's push waned, as he reportedly became addicted to painkillers. He continued to wrestle at the major PPV's throughout the rest of '91, including defeating Dino Bravo at Wrestlemania VII, but no more titles came his way. In 1992, after competing at the Royal Rumble, the Tornado's stock plummeted after another problem with painkillers, as well as other drugs, and he was eventually released by the WWF when he was arrested in February for attempting to falsify drug prescriptions. Kerry would go into rehab, trying to repair his life, but ultimately failed, being arrested once again a year later for a cocaine possession charge. Since he was already on probation, a jail sentence was likely, but, sadly, never happened, as Kerry Adkission commited suicide on February 18th, 1993, dying of a self-inflicted gunshot wound to the chest. He was 33 years old.