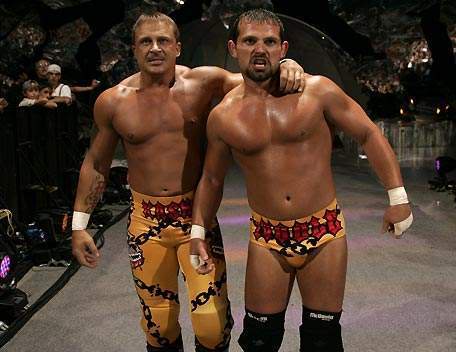 Despite his name, passion and determination --not money-- propel ECW's Kid Kash.

On June 16, 2000, Kid Kash was on the road to an ECW house show in Salem, N.H. It was a day like any other--until his telephone rang. He learned that his grandmother, who had raised him since birth, had passed away. Sorrow gripped Kash's soul and ripped away at every fiber of his being. But he still went on to wrestle that night.

Kash had no choice but to wrestle. Such dedication is the only way Kash survived the torturous mental and physical training of Ricky Morton. It is the only way he persevered through 10 years of wrestling in front of sparse crowds in the Southern independents. That dedication is what finally enabled him to win the ECW world television title.

Kash (real name: David Cash) has devoted his life to the wrestling business, and his dedication has made him one of the top stars in ECW.

Kash grew up an avid wrestling fan. He watched the National Wrestling Alliance and then WCW. The thought of becoming a wrestler didn't enter his mind until some local grapplers, impressed with his surfer look and accomplished physique, approached him at a gym. They told the then-18-year-old Kash to come to the card that night, and if there was a spot, he would be given a match. "Somebody didn't show up, so they just put me in there and threw an outfit on me," Kash says. "They told me to jump off the ropes a few times and get beat. I did and other than the jumping, I knew nothing else."

Kash was impressive enough in his debut that he caught the attention of veterans Ricky Morton and Tim Horner. Morton immediately saw potential in Kash's agility and leaping ability. Kash had already perfected the hurracanrana (a.k.a. the Frankensteiner) by watching Scott Steiner execute it on television. Now Morton was about to take Kash through five years of cruel lessons. Kash learned the inner workings of the business by silently sitting in the back seat on road trips, listening to the conversations between Morton and other veterans like Morton's Rock 'n' Roll Express tag-team partner Robert Gibson, Wahoo McDaniel, and Greg Valentine. Kash would often find himself in the ring with the men he idolized as a child. He became a human punching bag for Valentine and McDaniel, as they would test Kash unmercifully with stiff kicks and punches while bending Kash's body in unnatural positions with right holds. Kash took a pounding every night and was rewarded with a handshake and a few compliments.

"The whole time I was sitting in the back seat [driving to shows with Morton and Gibson], they were telling me to work light and sell everything and everybody would take care of you," Kash says. "These guys were just beating the piss out of me, stretching me and all kinds of other things, just playing with my ass because they didn't respect me. I stayed working light with them even though they were beating me up, and I gained their respect ... at the end of the night they would tell me I did the right thing."

After working 14-hour days as a pipe welder and then suffering through long nights on the road and horrific abuse, Kash's passion and dedication still could not be curtailed. He was determined to make it as a wrestler, and soon he began to see the rewards of his dedication. Kash began wrestling in two or three states in just one weekend alongside Morton. His pay rose from $3 to $300 per match. Then, one night in 1995, Morton paid Kash the highest compliment possible: He asked him to be his new tag-team partner.

While Kash credits Morton with teaching him politics, philosophy, and an innumerable amount of in-ring lessons, the tag team was destined to disband from the beginning. Kash was a young upstart trying to make a name in the business. Morton was an aging superstar who was living off his name. The former NWA/WCW world tag-team champion was more interested in partying than capturing tag-team titles. Kash knew he had to separate himself from Morton's wild antics before Kash became old before his time.

"In my opinion, Ricky ... back in the day, I don't think there was a [better] wrestler other than Ric Flair," Kash says. "He can sell his ass off and make it so believable. I've been on shows on the indies and watched him sell, and I've seen people in the front row actually try to climb over the guard rail to help him just because he made it so believable. That's the kind of stuff I've always been into, the selling. Even in ECW, I try to bring a little of the South them. I don't see too many people doing arm drags, so I like to do arm drags and hip tosses and even throw a dropkick in there every now and then."

Kash joined ECW in the middle of 1999 and once again found his dedication tested. He was back to the opening match, but this only made Kash work harder. He finally caught the eye of booker Paul Heyman and earned a spot on the Guilty As Charged pay-per-view on January 9, 2000. Kash knew it was his chance to steal the show and become a star on a national stage. Only two nights earlier, the Dupp Brothers landed on Kash wrong and broke his jaw. Kash had surgery on his jaw and then wrestled on the show in severe pain. He even executed high-flying moves.

Throughout the year, Kash slowly climbed the card. He earned the attention of not just the ECW faithful and Heyman, but WCW, who offered the high-flying, huracanrana master a contract. Kash promptly turned it down to stay with ECW, saying it was time to "make the right business decision." Just as things were coming together for Kash in ECW, he suffered the greatest loss of his life when his grandmother passed away. Now his dedication in all facets of his life would undergo its sternest test.

"The reason I stayed was because I was already in the car going to Salem, and she had already died," Kash says. "There was not going to be any funeral or family night until Sunday or Monday. I'm not going to lie: My career means so much to me. This is what I've lived my life for. I just had to shut it out, because the last thing I want to do is have a bad night in wrestling to where Paul [Heyman] might lose his confidence in me. I loved my grandmother with all my heart; she knew it and everyone knows it, but with her gone, all I've got is wrestling. The ECW crew was so great to me. It made me cry," Kash says. "They really stuck by me and let me know that they are my family now, if that's the way I want it, and they have been ever since. That's why I can't ever leave. They'll have to kick me out the doors."

With the support of the ECW talent, Kash's dedication to the business has grown stronger and taken him to new heights in the ring. He proved he belonged on top of the card in his first-ever ECW main-event match against Rob Van Dam on July 29 in Houston. A Van Daminator and five-star frog splash made Kash succumb to a three-count, but not before Kash had frustrated, bewildered, and almost defeated "the Whole F'n Show." Van Dam was so impressed that he selected Kash as his tag-team partner. With RVD's help, Kash achieved the greatest pinnacle of his career when he defeated Rhino in New York City on August 27 to capture the ECW world television title. Although Rhino won the belt back on September 9 in Toronto, Kash has proved he can be a threat to any title.

Kash has survived numerous injuries, mental frustration, and the loss of the person most dear to him by drawing on his fierce dedication to pro wrestling. It is this dedication that will make this exciting star continue to soar higher.