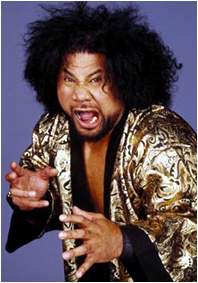 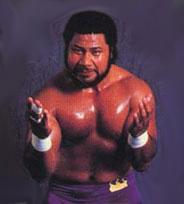 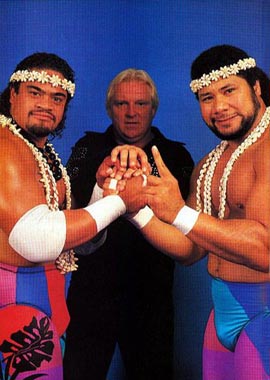 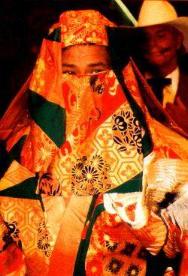 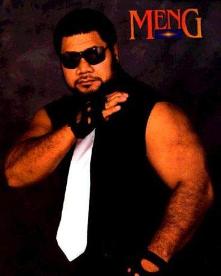 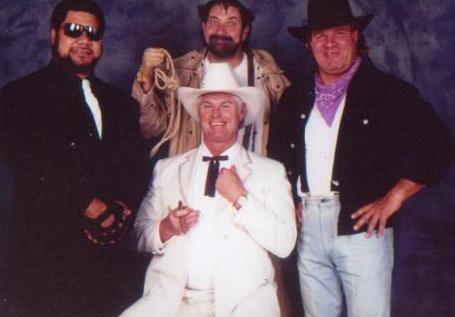 
History: Uliuli Fifita's history is somewhat spotty. He began wrestling under various names around the world. The first info I could find on him was in the NWA, where he held the NWA World 6-Man Belts with George Gulas and Ken Lucas. When Fifita (then known as Prince Tonga) left the area in October '79, the belts were vacated. Fifita then went up in the chain of royalty in Montreal, where he was known as King Tonga. In October 1984, Tonga won the Canadian International Heavyweight Title from Dino Bravo. Bravo came back 4 months later to regain his belt. This was just part of the great feud Tonga and Bravo had. In May 1985, Tonga teamed with Richard Charland to earn the vacated Canadian International Tag-Team Titles. They only held these a month before the Rougeau Brothers won the titles from them.

Not long afterwards, Fifita came to the WWF as Haku, a member of Bobby "The Brain" Heenan's camp. He wrestled for many years as a mid-carder. His biggest shot in the WWF came when he was teamed with the late Andre the Giant as the Colossal Connection. The two won the WWF Tag-Team Titles from Demolition in December '89. Colossal Connection were the champs for about 4 months before Demolition won back the belts. Immediately thereafter, the tag-team broke up, and Haku went back to the singles ranks, where he met with little success, despite having Heenan as his manager.

When Fifita followed the tide of wrestlers to WCW, he came up with another name, Meng. Meng worked as the bodyguard for Col. Robert Parker, feuding with "Hacksaw" Jim Duggan, among others. Meng then broke off from Parker to join with Kevin Sullivan's Dungeon of Doom, wearing an evil mask to the ring. Meng later teamed sometimes with the Barbarian as the Faces of Fear, as he became the savage member of Jimmy Hart's forces. Soon, it was obvious that not even Hart could control him, as he viciously attacked the Barbarian and other members of Hart's camp, and disappeared for many months. In July 1998, Meng reappeared in WCW, rescuing the Barbarian from a Flock attack... then taking down the Barbarian with his Tongan Death Grip. Meng and Jimmy Hart's men basically stayed on the midcard area for the rest of '98, with a small but longterm feud. Meng also feuded with Wrath, helping to put him over. Of course, it took TWO Meltdowns to eliminate Meng.

In '99, Meng began to get more of a push, getting a commercial done of him. He and the Barbarian, as the Faces of Fear, seemed to reform, becoming heavy favorites in the Tag-Team Title Tournament. But for some unknown reason, the Barbarian and Jimmy Hart turned on Meng, attacking him. Meng then began his war with the First Family again, this time sometimes with Jerry Flynn as his partner. Meng also entered the US Title Tournament, making it to the Semi-Finals by defeating Bam-Bam Bigelow, then losing to Scott Steiner. Meng then disappeared from the public eye for a long period of time, being known as the Monster, yet never getting a push towards a major title.

Meng returned to the limelight in the Mayhem World Title Tournament. His first opponent, the female wrestler Madusa, couldn't make a dent in him. Meng quickly showed that he doesn't care who his opponent is, throttling Madusa with the Tongan Death Grip. Meng then moved on to the next round, where he faced Sting. Due to Lex Luger's backfiring schemes, Meng ended up losing the match, as Sting went on. This caused Meng to start coming after Luger, who quickly went in the other direction. The two met at Mayhem, with Meng getting a rare pay-per-view victory by taking down the Total Package. This was a step up for Meng, who then began pursuing Norman Smiley, the cowardly Hardcore Champion at the time. Meng seemed like a sure fit for the Hardcore Title, as he was much larger and more powerful than Smiley. But interference by Fit Finlay caused Meng to lose to Smiley at Starrcade '99.

Meng, Finlay, and Smiley all met up again at Souled Out '00, where Brian Knobbs, the new Hardcore Champ, put up the belt in a four-way brawl. Despite Meng being impossible to keep down, Knobbs took out Smiley to stay the champion. Meng's big chance at the Hardcore Title left him, and the Monster again lost his push. Meng would appear occassionally in the next few months, with no real plot behind his power displays, other than to show that he could still destroy opponents. He became a Hardcore factor again in April '00, when Eric Bischoff & Vince Russo took over WCW again. But he lost in the massive Hardcore blow-out to decide the major contenders, which was won by Terry Funk & Norman Smiley. In June '00, when WCW began cutbacks, Meng was one of the first to go, being released from the wrestling promotion.

In the later months of 2000, Meng reappeared in WCW, wrestling without a contract. He was brought out as a surprise opponent for Bill Goldberg at one point, when Goldberg was under the stipulation that if he lost a match, he would be fired. Goldberg easily defeated Meng. Meng would then appear sporadically in WCW for the next few months. At the beginning of 2001, Meng once again entered the Hardcore division, feuding with Terry Funk and Crowbar. At WCW Sin, Meng got his title shot, and this time didn't let it go to waste. When Funk and Crowbar couldn't work together against the Monster, Meng took them down, winning the WCW Hardcore Title, his first belt in WCW. This lasted approximately a week, as Meng, still not under contract, left WCW shortly thereafter. He took the Hardcore Title with him, which was later vacated and retired by WCW.

At the end of January '01, Haku reappeared in the WWF, making a shocking appearance at the Royal Rumble. He was eliminated by the eventual winner of the event, "Stone Cold" Steve Austin. Still, his presence was felt in a major way. Haku then began teaming with his fellow family member, Rikishi Phatu. The two men joined up against the Undertaker and Kane, who were a formidable family group themselves. The feud was short-lived, however, when Rikishi was put on the shelf with an injury. This killed any push that Haku had been developing, saddling him on the lower shows of the WWF, including jobbing on Sunday Night Heat to other talent, and destroying unknown wrestlers during house shows. In June '01, Haku finally resurfaced on the top shows, joining up with the APA's vigilante group to fight against the invading WCW forces. He was part of many major assaults against WCW, but when the vigilante group fell apart due to the ECW wrestlers' betrayal, Haku again faded from the main scene of the WWF.

In '02, Uliuli Fifita retired from professional wrestling, although he still appears occassionally on the independent scene. For a time, he lived in Florida as a car salesman. But whatever Fifita does from now on, he'll always be remembered for his runs in WCW and the WWF.