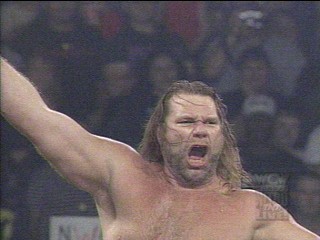 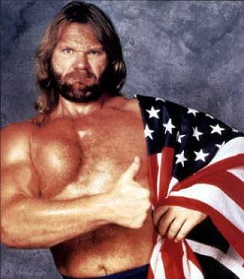 "Hacksaw" Jim Duggan certainly has to be recognized as the wrestler who's made the most out of a 2x4, wielding the weapon for decades now inside the squared circle. Duggan began his career with the WWF in the late '70s as a jobber. He also wrestled some in Louisiana, being the last Louisiana Heavyweight Champion before the belt was abandoned. He eventually went over to the NWA Mid-South promotion, where he joined up with Ted DiBiase and Matt Borne as the Rat Pack. Soon, however, Duggan realized that he just wasn't moving along in the title path with DiBiase, and broke from the Rat Pack, teaming with Magnum T.A. instead. The two then went on to win the NWA Mid-South Tag Team Titles from DiBiase and Mr. Olympia in July '83. Duggan and Magnum T.A. then held the belts for almost 3 months before losing to Jim Neidhart and Butch Reed.

After wrestling briefly in Florida, Duggan came back to the NWA Mid-South and truely earned one of his greatest honors. After tricking Dick Slater into a wrestling match, Duggan defeated him for the NWA Mid-South North American Heavyweight Title. Duggan would hold the title until it was abandoned in March '86. Soon after, Duggan joined the UWF, where he eventually teamed with Terry Taylor to win the UWF Tag-Team Titles from Bill Irwin and Leroy Brown. The two would stay the champions until Duggan lost a "loser-leaves-town" match with the One Man Gang, causing him to vacate the titles. "Hacksaw" then went to the WWF, where his fame as a patriotic, slightly crazy wrestler truly grew.

In 1988, Duggan won the first Royal Rumble, showing his skills in a brawling atmosphere. He soon became known as a flag-toting fighter, who would chant "USA" and get the fans riled up. Many of Hacksaw's early feuds were against non-American wrestlers, like Boris Zuekov and Dino Bravo. When Bravo brought in the Canadian Earthquake, Hacksaw was one of the first to go after the 'rib-breaker'. Duggan allied himself with Nikili Volkoff (who had just forsaken Russia for the USA) and Hulk Hogan, among others, to battle the Canadian menace at successive PPVs. Duggan, unfortunately, usually fell to Bravo and the Canadian Earthquake.

When Sargeant Slaughter returned to being a face in late '91, "Hacksaw" quickly sided with him, forming a potent tag-team that battled against the evil elements in the WWF. For the next year, Duggan and Slaughter fought against everyone, from Colonel Mustafa (Slaughter's old tag partner) to the Nasty Boys. When Slaughter left the WWF's active wrestler sheet, Duggan went back to fighting the battles on his own, occassionally teaming up with another zany group, the Bushwackers. But Duggan's fame in the WWF was about used up. After losing to Bam-Bam Bigelow quickly at the King of the Ring tournament in 1993, Duggan faded into the background, rarely being used in any substantial feuds.

In 1994, "Hacksaw" Jim Duggan left the WWF behind him, coming to WCW. He immediately showed his power, winning the WCW United States Heavyweight Title from Steve Austin in September. Duggan would hold the belts for 4 months until being defeated by Vader. After losing the title, Hacksaw stayed as a midcarder in WCW, wrestling against some of the top names but rarely getting a title shot. In 1998, Duggan appeared before the fans wearing a suit. He told his fans that he had been diagnosed with cancer. In a very moving speech, Duggan thanked their fans for their continued support over the years. He also said he would do his best to return one day.

In early '99, Duggan reappeared, announcing his return to the wrestling world. He started the fans chanting "USA", and defeated the wrestler he faced that night, showing that the Hacksaw is back in charge. That was basically the end of Duggan's push, however, as he was regulated back to Saturday and house shows. In September '99, Duggan was the quick replacement in a match against Berlyn, when Buff Bagwell was late arriving at the arena. Duggan put up a good fight, but, due to the Wall (Berlyn's bodyguard at the time) interfering, Berlyn won the match. Once again, Duggan faded out, not having the fan power that he used to.

When the Powers That Be came to WCW in the late months of '99, Duggan was given a new responsibility. He was made a janitor at WCW events. Duggan and the Powers That Be had a lot of 'disgusting' encounters, which sent the Revolution after him. Duggan repeatedly tried to fight the numbers battle, against Shane Douglas, Dean Malenko, Perry Saturn, and Asya, but he never managed to win the fight. In December '99, Duggan made a deal with the Revolution. If he won, the Revolution members would become janitors. If he lost, he would forsake the American flag. At Starrcade, Duggan brought back the Varsity Club, consisting of Kevin Sullivan, Mike Rotunda, and Rick Steiner, to lend him a hand against the Revolution. Unfortunately, the Varsity Club had other plans, deserting Duggan. Hacksaw couldn't win the fight on his own, and lost the match. At the next Nitro, the Revolution ordered Duggan to fulfill his agreement, but Hacksaw refused to turn on the red, white, and blue, taking a beating instead.

Duggan's career took another trip back to Saturday shows, as, in February '00, Hacksaw, still as a janitor, found the Television Title in the trash, where Scott Hall had discarded it. Duggan started defending it as his own, fighting against some of the lowcard talent on WCW Saturday Night. This lasted for a few months, until Eric Bischoff and Vince Russo returned to run WCW, vacating all of the titles. Duggan then was once again regulated to the back, although he did appear during an all-out Battle Royal between everyone in the company to aid the Millionaire's Club against Russo and the New Blood.

During the summer of 2000, Duggan began coming out along with the Misfits in Action (MIA), especially with General Rection, against the threat of Team Canada, led by Lance Storm, the United States (Canadian) Champion. It was announced at Fall Brawl '00 that Duggan would be the special outside enforcer during the title match between Storm & Rection, keeping the rest of Team Canada away. During the match, Rection had the advantage, and was about to go for his No Laughing Matter moonsault, when Duggan suddenly hit him with a 2 x 4. The stunned Rection was then easily put in Storm's submission hold and forced to give in, allowing Storm to keep the belt. Duggan then entered the ring and took off his MIA shirt to show a Canadian shirt underneath. For the first time in his very long career, Duggan had turned on America.

During the next month, Duggan joined Team Canada against the MIA. They kidnapped Major Gunns, keeping her with Team Canada and tutoring her on what a Canadian lady would do. To get her back, General Rection had to agree to a handicap match at Halloween Havoc, himself against Duggan & Storm. It was a pretty good fight, with Team Canada dominating for the majority. But miscues between Duggan & Storm proved costly, as Duggan missed his 2x4 swing. Rection then got his moonsault and the win, earning both Major Gunns and the United States Title. Storm blamed Duggan for the loss, causing Hacksaw's ties with Team Canada to become very fragile. His continued blunders over the next few months cost Team Canada a few wins here and there, but he continued to be on their side. At Starrcade '00, Duggan came out to help Storm against "The Cat" Ernest Miller, clotheslining him. Storm then locked on his Canadian Mapleleaf, forcing Miller to submit. After the match, the Canadians celebrated. Then, suddenly, Storm & Elix Skipper attacked Duggan, beating him down. The Cat came to his aid, but it was obvious that Duggan's ties with Team Canada were over.

This left Duggan as an outcast of sorts. He had turned his back on America, but now had no country to call home. This made him the perfect special guest referee at WCW Sin in January '01, when Team Canada faced off against the Filthy Animals. The match was labeled a "Penalty Box" match, with Duggan having sole authority over who went into the box when. Many penalties were called, leading sometimes to 3-on-1 attacks. In the end, though, Team Canada managed the victory, with Storm forcing Billy Kidman to submit. After this match, Duggan faded into the backstage area, and did not appear during the last few months of the Turner-ran WCW.

Hacksaw soon began appearing on the independent circuit, including several appearances with the World Wide Wrestling Alliance. However, Duggan's ties with the WWWA were broken due to an announcement that Duggan was a part owner of the organization, which Duggan quickly denied, stating that he had never signed a contract with them. It was apparently another 'promotional tactic' from WWWA owner Dave Nelson, who had already been criticized in the past.

In October '05, Duggan reappeared in World Wrestling Entertainment, joining several other former wrestlers at the WWE Homecoming show. Duggan was part of a memorable skit, where Mae Young showed off her 'body' to Duggan, "The Million Dollar Man" Ted DiBiase, and "Superfly" Jimmy Snuka. While Duggan and DiBiase begged Young to put her shirt back on, Snuka took some of DiBiase's money and followed Young down the hall! Later on, Duggan joined the rest of the WWE Legends in the ring for a celebration, which was interrupted by "The Con Man" Rob Conway. The WWE Legends quickly took down Conway with several finishers, taking care of the interloper.

A few weeks later, it was announced that Conway & Tyson Tomko would be involved in a "Taboo Tuesday" Tag-Team Match against Eugene and a WWE legend that would be voted on by the fans. Duggan was a close second in the voting behind Snuka (43% to 40%), but still played a part at the PPV, as he and the other candidate, Kimala, ran out to help take out Conway & Tomko after the match (which was won by Eugene & Snuka). Duggan then again disappeared from WWE television, at least for a few months.

In early '06, during the feud between John Cena and Edge, Cena began referencing Lita heavily as a Ho. In one famous interview, Cena mentioned Duggan, calling Lita a "Hooooooooo!". This led to Duggan later making a return to WWE and getting involved in the feud, getting in on the jokes towards Lita. After a few weeks of battling Edge (and usually losing), Duggan spent a few months again on the independent scene, while occassionally wrestling a dark match before WWE events. In May '06, Duggan returned full-time to WWE Raw, becoming the mentor for Eugene and joining him in the battle against the WWE Raw Tag-Team Champions, the Spirit Squad. Duggan & Eugene also appeared to form an alligiance with another strong tag-team, the Highlanders, helping to balance out the numbers game against the 5 members of the tag champs.