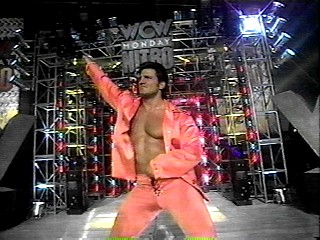 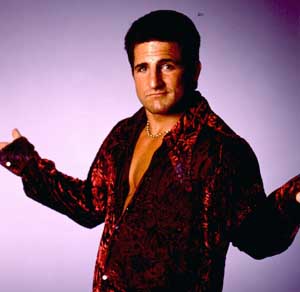 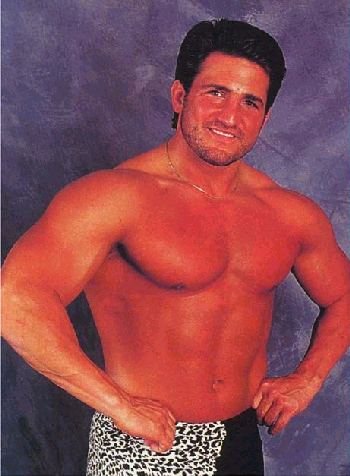 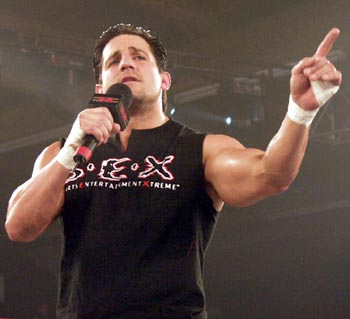 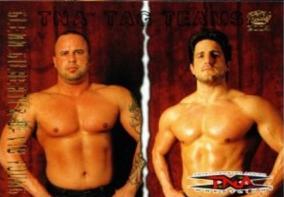 
History: Who came to see the Disco Inferno dance? The Disco Inferno can definitely be called one of the more interesting gimmicks in wrestling history. Disco first began wrestling in Georgia, before moving on to Michigan, a brief shift in the WWF, then to the USWA in 1992. Disco first became a well-known wrestler in WCW in the early '90s without much success. In 1997, he had four months left on his contract when he "broke" contract by refusing to wrestle a woman. He then went to the PWE, managed by Nortorious Norm, for a short while. Next on Disco's travels was the MEWF, where he won the MWEF Heavyweight Title in April '97. A few months later, Disco returned to WCW with a splash, winning his first gold there by defeating Alex Wright for the WCW World Television Title. Disco held the title for nearly 2 months before losing to Perry Saturn.

A month after his loss, Disco won back the Television title from Saturn. His second title reign lasted less than one month before being beaten by Booker T. Since then, Disco has mainly been a midcarder and a "jobber" in WCW, facing such wrestlers as Bill Goldberg and the Flock. Disco recently has teamed with both Alex Wright and Tokyo Magnum to form the Dancing Idiots. So far the tag team has not been inspiring.

Disco also had a brief feud with Juvy Guerrera, after Juventud disputed his ability to wrestle as a Cruiserweight. This feud didn't last very long, however. Soon after, Disco began trying to join the Wolfpac, appealing to Konnan and other team members. When the new nWo Wolfpac formed, Disco continued to try and earn their favor, particularly Scott Hall's. Hall seems to have been receptive, as he's aided Disco many times in his matches, the biggest of which getting Disco a HUGE upset win over Wrath. This was the sign that Disco was finally getting a push, becoming connected with the nwo Wolfpac.

In '99, Disco's had a few good feuds without moving very far. Disco worked as Scott Hall's lackey for a time, aiding him against Bill Goldberg and Bam-Bam Bigelow. Disco also feuded with Booker T, who soundly defeated him at Superbrawl IX. Disco then moved on to other things, before beginning a good feud with Konnan. The feud began when Disco became envious of Konnan's rap videos and edited one, putting himself in it. Disco also started appearing as La Cookooracha, a masked 'cruiserweight' who apparently didn't speak English. Konnan saw right through this, however. The two met at Spring Stampede, with Konnan using Disco's finisher to get the win.

Disco stayed in the background for the next month, as Scott Hall was out for an extended period of time. The Disco Inferno returned to the 'front', though, in June '99, challenging some of the older talent and joining the youth revolution. However, Disco turned the other direction a few weeks later, facing "Buff" Bagwell at the Great American Bash, where he was soundly defeated. Disco then became involved in a feud with Ernest "The Cat" Miller, since both love to dance, Miller as James Brown, Disco as, well, Disco. The two signed a match at Bash at the Beach with the stipulation that whoever loses, can't dance anymore. Due to Sonny Onoo distracting Disco, Miller got the pinfall and the victory. Disco vanished for a while after that, leaving many to believe that "Disco" might be dead.

However, Disco soon made his reappearance, still dancing as always. It's still unknown if the "Last Dance" clause was just dropped, or simply ignored. At the beginning of October, Disco got the match he needed to renew his career, being the first defense of Psychosis, who had won the Cruiserweight Title just a few days before at a house show. Disco surprised everyone by getting the victory and becoming the Cruiserweight Champion. He went on to hold the belt for over a month, defending it against guys like Lash LaRoux and other worthy challengers. He defeated LaRoux cleanly at Halloween Havoc. Disco soon after started bringing a new ally to the ring, in the form of Tony Marinara, a half-crazed Brooklyn-style fan. Disco went to WCW Mayhem to face Evan Karagias, but lost the Cruiserweight Title after a chair shot from Disco accidentally knocked out Marinara. Disco was too shocked to dodge Karagias, and lost the belt.

The next month, Disco began a long war with Marinara and his thugs, Big Vito and Johnny the Bull. He was joined, surprisingly, by LeRoux. The two continually pulled gags on the thugs, and even went as far as to tar 'n' feather Marinara. But the tables were turned at Starrcade, when Disco accidentally hit LeRoux with the Last Dance, allowing Vito and Johnny to get the win. This led to Disco Inferno becoming a manager/enforcer for the Mamalukes tag-team, to pay off his debt and earn the 'forgiveness' of the Mafia-like family. Disco also teamed up with Big Vito in the WCW World Tag-Team Title tournament, but they were eliminated quickly by Buff Bagwell & Kanyon. Moving into 2000, Disco continued to earn his pay, eventually leading the Mamalukes to the Tag-Team Titles. He also became more arrogant, if that was possible, continually paying for his mouth's sins.

When Eric Bischoff and Vince Russo returned to WCW in April '00, forming the New Blood, the Disco Inferno was quick to sign up with the Mamalukes. Disco again, however, found himself without a major role, doing the dirty work for the New Blood and, usually, paying for it. As the Mamalukes began wrestling on their own, trying to become a power again, the Disco Inferno jumped groups, joining with Rey Mysterio Jr, Juventud Guerrera, and Konnan in the Filthy Animals. The Animals then became embroiled in a major war with the Misfits in Action, who were against the New Blood after being 'fired' by Eric Bischoff. Disco was the first one to really step up, challenging Lt. Loco (Chavo Guerrero Jr) for his Cruiserweight Title. The two met up in a match at the Great American Bash '00, which quickly had a lot of interference by both the Filthy Animals and the MIA. In the end, Lt. Loco landed his Tornado DDT, taking the win, and keeping Disco from reclaiming his title.

The feud with the MIA continued for another month, leading to Lt. Loco vs. Guerrera at the next PPV. Both stables were banned from ringside, but Disco and the rest of the Animals got around it by wearing masks, interfering for Juvy. However, the MIA had the same idea, and eventually Lt. Loco again left with the belt. At Fall Brawl '00, Disco and the rest of the Filthy Animals were made "enforcers" by Ernest "The Cat" Miller in the four-way Tag-Team Title match between Kronic(c), Jindrak & O'Haire, General Rection & Corporal Cajun, and the Perfect Event. While Disco was the special referee, the rest stayed on the outside, interfering every so often, while Disco kept doing a slow count. Eventually, Chavo Guerrero Jr came down during the melee and took Disco's shirt, making the count and giving the win to Kronik. Later that night, Kronik lost the belts to Vampiro & the Great Muta. At the next Nitro, with Disco & Konnan helping, Guerrera & Mysterio were able to take the tag-team titles from them.

Disco's relationship with the Filthy Animals began going downhill in the next month. He lost the tag-team titles for his stable, after challenging Ernest "The Cat" Miller for his Commissioner spot and losing the fight. Jindrak & O'Haire later won the belts in the Battle Royal. Things continued to intensify between the Disco Inferno and his compadres, even as the Filthy Animals began battling against the Natural Born Thrillers. After various encounters, the two stables decided on an 14-person Elimination match at Fall Brawl. The teams consisted of Disco, Mysterio Jr, Guerrera, Konnan, Big Vito, "Mr Wonderful" Paul Orndorff, and Tygress fighting against Mike Sanders, "The Total Package" Chuck Palumbo, "PerfectSean" Stasiak, Mark Jindrak, Sean O'Haire, Reno, & Johnny the Bull. The match didn't go well in many ways. First, after the match had progressed a few minutes, Disco accidentally hit Konnan with the Last Dance, allowing Jindrak to get the easy pin. This was the last straw, and the Filthy Animals later refused to tag Disco. Big Vito finally did tag him, with a fist, allowing Reno to take him out of the match. The fight later ended when Orndorff badly injured himself doing a piledriver.

Disco began feuding with both the Filthy Animals & the Natural Born Thrillers, allying himself once again with his dancing buddy, Alex Wright. The Boogie Knights battled against the tag-team champions Jindrak & O'Haire and Mysterio & Guerrera at Halloween Havoc '00. It was a wild affair, with three men legal at any time. The Boogie Knights had the advantage near the end of the fight, with Disco getting the Last Dance on Jindrak. But with Wright outside of the ring, Disco was left alone, and O'Haire came in to hit the Swanton Bomb on Disco and get the pin, keeping the tag-team belts for his team. Disco would continue appearing with Wright in both tag-team and singles competition, keeping the feud with the Filthy Animals going by recruiting Kronik, the paid enforcers, to attack the cruiserweights. Disco, meanwhile, was nursing injuries, keeping him off the circuit. He was partially announced as the tag-team champions with Wright for a week, when Wright (with General Rection) won the belts over Jindrak & O'Haire in Germany. WCW tried to play this off as if the Boogie Knights had won the belts. With Disco still injured, though, Wright lost the belts soon after to the Perfect Event, with Elix Skipper as his partner.

At Mayhem '00, Disco paid off Kronik with all the money he had, for them to join Wright in a Handicap match against Kidman & Mysterio. But after over 7 minutes of brutality from the duo, Kronik suddenly left, saying that Disco had only paid them for a certain amount of time. Wright was then decimated by Kidman & Mysterio and taken out, getting another loss for the Boogie Knights. After the defeat, both Disco & Wright faded back out of the scenes, losing to up-and-coming tag-teams. Disco stayed more in the background, as one of the 'bookers' for WCW. Throughout 2001, Disco rarely had a major role in any WCW events.

The Disco Inferno didn't make an appearance during the Season Finale of the Turner-ran WCW, ending his career there quietly. He also was not picked up by the WWF, leaving him to wrestle on the independent circuit for a time. Disqo's next major appearance would be in Australia, when he joined up with the WWAS along with many other former WCW wrestlers. He competed in the First-Round of the WWAS Heavyweight Title Tournament in a Battle Royal, but was tossed out early on. Still, the wrestler is once again struting his stuff in front of large audiences, proving that Disco is not dead yet.