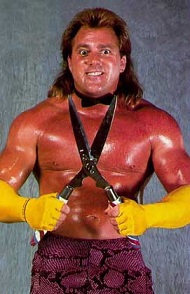 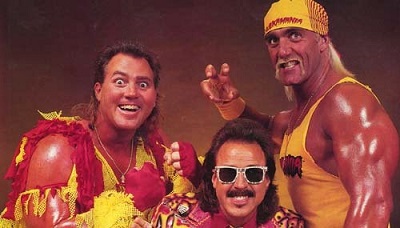 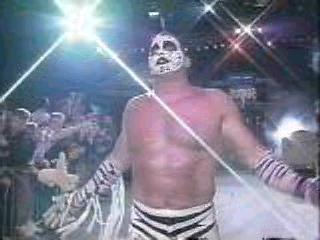 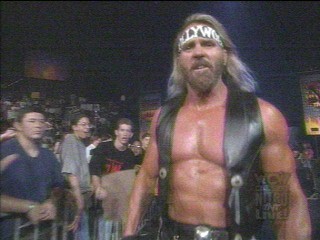 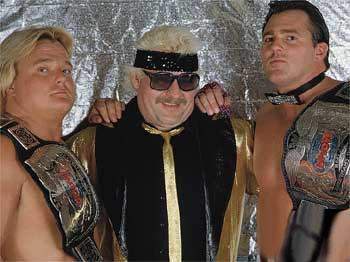 
History: Ed Leslie's wrestling career, once looking to always be going up, turned downward rapidly after one fateful day. Leslie first began wrestling in 1977, building up a career for himself and slowly connecting himself with another budding superstar, Terry Bollea (later better known as Hulk Hogan). With Bollea wrestling as "Terry Boulder", Leslie took on the name Eddie Boulder, and would hold the NWA Southeastern Tag-Team Titles with Robert Fuller in 1980. Leslie would later change his name to once again follow his friend, as he became "Dizzy" Ed Hogan in the NWA, winning the NWA Southeastern Tag-Team Titles two more times (with Ken Lucas). In 1984, Leslie managed to join up with Hulk Hogan's current place of residence, the World Wrestling Federation. It was here when everything exploded for Leslie.

Brutus Beefcake was first seen as a male stripper who was looking for a manager when he came to the WWF in 1984. He eventually joined up with heel manager Johnny Valiant, who would later pair Beefcake up with Greg "The Hammer" Valentine, forming The Dream Team. In August 1985, The Dream Team won the WWF Tag Team Titles from the US Express (Barry Windham & Mike Rotundo). The Dream Team held the belts for a little more than 7 months before being beaten by the British Bulldogs. This was the last WWF title reign of Leslie's career, as the Dream Team soon went their separate ways.

Soon after, Brutus "The Barber" Beefcake became a fan favorite for his hair-shaving of his opponents after they were knocked out from his sleeper. He became a great friend of Hulk Hogan, and the two helped build the reputation of the WWF up to new heights. Then, in August 1990, tragedy struck. Leslie was in a freak parasailing accident, in which a parasailer accidentally ran into him while in mid-flight, kneeing Leslie in the face. The injury was very severe, as it basically caved his face in. Over 100 steel plates were put into Leslie's head, to help restore his facial structure. The major consensus was that Leslie would never wrestle again.

In late 1993, Brutus Beefcake reappeared on the scene of the WWF, wrestling with a special "mask" to secure his face. He even teamed with a formerly retired Hogan to wrestle against Ted DiBiase and I.R.S. (Michael Rotunda) at Wrestlemania IX. But Beefcake's wrestling career was slowly sinking away. He began a talk show through WWF called "The Barber Shop", which was somewhat popular. But when, in 1993, Hogan went to WCW, Leslie followed, after a brief tour in New Japan Professional Wrestling.

Leslie attempted many gimmicks through WCW, but very few were successful. He turned on Hogan and became "The Butcher" for a while, joining the Three Faces Of Fear. The gimmick did not appear to work well, however, and soon Leslie became The Zodiac, a member of the Dungeon of Doom. After a few less-than-inspiring matches, Leslie left WCW for a brief hiatus, before returning in 1996 as The Booty Man, a poorly conceived character who did not last long. After attempting to join the nWo with his old friend Hollywood Hogan (and being severely beaten for his efforts) the Booty Man disappeared from the scene.

In February 1998, the Disciple appeared by the side of Hollywood Hogan. He had a brief feud with Diamond Dallas Page, but was mainly the follower of Hogan, rescuing him time and again with his Apocolypse (a version of the Chartbuster). In September '98, however, the Disciple was "abducted" by the Warrior, appearing occassionally facedown in the ring, then disappearing before Hogan could reach him. During a Monday Nitro, the Disciple appeared next to the Warrior, wearing an OWN jacket. He then became the second member of the One Warrior Nation. When Hogan "retired" in December '98, both Ed Leslie and the Warrior were said to have been released from WCW. However, a month or so later, the Disciple reappeared, mainly wrestling as a jobber. He did have one final WCW moment in the sun, when Ric Flair offered him a contract extension if he could defeat Hogan in a match. Unfortunately, Hogan won out. Since then, the Disciple has not been seen in the WCW wrestling world.

In May '00, Leslie appeared in the Extreme Wrestling Federation (EWF), once again being called Brutus "The Barber" Beefcake. He had a 25-minute match with their new Television Champion, Rex Diamond. The match went to a No-Contest, though, when Tommy Green interfered. Beefcake & Diamond beat down Green afterwards, with the Barber bringing out his trusty pair of scissors and shearing off some of Green's hair. Beefcake was later inducted into the EWF Hall of Fame. In July '00, Leslie showed up in Australia, wrestling for i-Generation as "Brute Force".